The evocative plains of Camdeboo 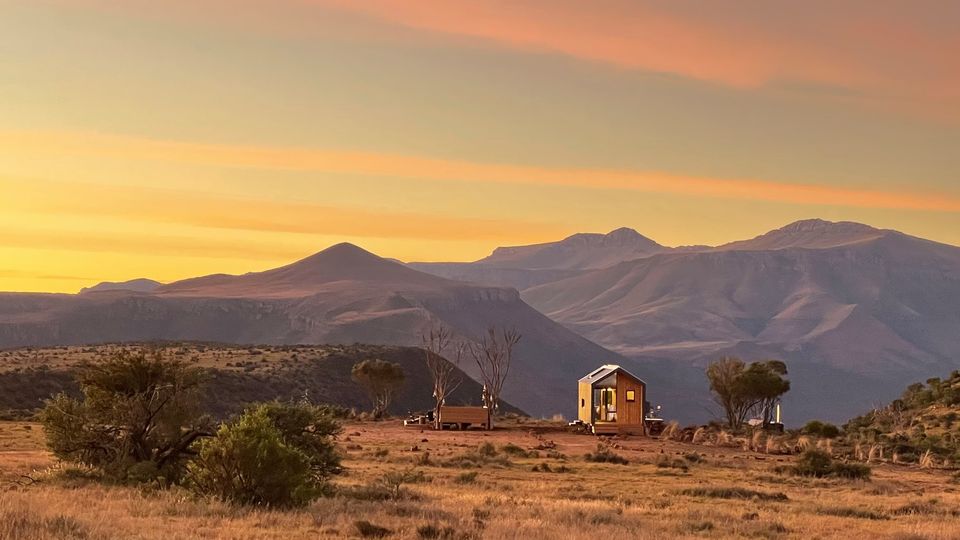 We are frequently asked about places that are off the main tourist routes and thought we’d introduce you to The Plains of Camdeboo.

Eve Palmer in her book The Plains of Camdeboo describes the Camdeboo as “a country flooded by sun, lonely, sparse, wind-swept and treeless on the flats for many miles.”  However, the name Camdeboo derives from the Khoikhoi and means either green heights or green hollow, from water in the mountains and valleys that provided a splash of green in the otherwise arid landscape.

We know, we’re not selling it very well, it’s difficult to credit that a place so desolate can be so heart-achingly beautiful, but a visit to the Valley of Desolation will silence the most vociferous sceptics. Just a short 14 km drive from town of Graaf Reinet, precariously balanced columns of Dolerite rise 120 metres from the valley floor, against the timeless backdrop of the vast plains of the Camdeboo. This is the product of volcanic and erosive forces of nature over 100 million years.

One of the things we really enjoyed about our recent visit to Mount Camdeboo Private Game Reserve was our sundowner stop with the sweeping views across these plains. The game drive experience takes one onto the mountain escarpment which is very special.  If you’re looking for a next level experience a night out in one of their pods is a must-do.  The pods are perched on the edge of the escarpment and guests get to have the reserve and the beautiful night skies all to themselves. An unforgettable safari experience in the heart of the malaria-free Great Karoo.

For many South African’s the Great Karoo, a semi desert area which makes up most of the country, with is quaint little towns is unique and quintessentially South African.  A great example of this is Nieu Bethesda, once a small but vibrant centre for the local farming community but in the 1940’s and 50’s the village was eclipsed by the larger towns in the district and its population went into a steep decline. This resulted in an isolated and improvised community. Serendipitously the lack of development left the village with a rare historical and architectural integrity. Today, this unique appeal and the renown associated with the Owl House has turned the village into a tourist attraction.

Weird to some, wonderful to others, the Owl House is a work of outsider art created by Helen Martins between 1945 and 1976. Driven to despair by the dullness of her daily life, she took steps to transform her world with light, colour and texture.

Another equally worthwhile highlight is the Bushman Heritage Museum, where Bushman descendants have been making giant tapestries and lino-prints exploring the creation mythology of the |Xam.  The unique works attracted the curator of the British Museum to visit from London to see and purchase a tapestry.

The geology of the Great Karoo provides the perfect conditions for the preservation of ancient fossils, and we’d recommend a visit to the Kitching Fossil Exploration Centre. The centre showcases the fossils found both in Nieu Bethesda and in other places in South Africa. The fossils date to a time 50 million years before the age of dinosaurs when the continents were merged in a supercontinent called Pangea.  We would also recommend a visit to Wellwood Farm to view Sidney Rubidge, a renowned amateur palaeontologist, collection of fossils – reputed to be the largest in private hands.

With so much to do in this area you’ll want to stay a night or two and we’d recommend the Drostdy Hotel in Graaf Reinet.  This historic property has been sensitively restored and developed.  The town itself has benefited from the Rupert Family Foundation which has helped to preserve much of its character.  It is the fourth oldest town in South Africa and the sense of frontier history adds another dimension to your visit.

The Foundation was also instrumental in the establishment of The SA College of Tourism, which is an economic empowerment institution aimed at young, disadvantaged, rural women (demographically worst affected by unemployment). Through its Hospitality Training Division, which is linked to eco-tourism, the SACT has dedicated itself to the upliftment, promotion and upskilling of these young individuals.

Why we think the area is of interest?

It just has so much to offer, and it combines well with a stay in the Garden Route or a trip through the Klein Karoo on the famous Route 62.  Budget sensitive guests who want to have a safari experience but without the cost of an extra flight could well consider this option.